Trauma is a state of being overwhelmed with information to the point of being unable to process, causing one’s internal state to become fragmented and linked with strong negative affects. It often results in a state of dissociation, making one’s internal world chaotic. A person who was traumatized by a dog attack may react to a perfectly safe encounter with a dog in the future with extreme fear. Because the trauma causes a real internal state of fear, they might even sincerely accuse the dog of attacking them. If one truly were endangered and being attacked, the response of fear would be correct and not considered trauma. However, trauma manifests in a debilitating inability to evaluate a current situation, causing the present to be colored by a projected past one.

Being attacked or victimized can cause trauma, but attack and victimization are different from being traumatized. Another person who experienced an identical dog attack may not develop trauma, as a personal sense of incapacitation is more predictive of trauma development than the incident itself.

The good news is that trauma is not a perpetual identity, but a state from which recovery is possible. When a person’s attack or experienced victimization is weaved into a cohesive self-narrative, where an incident is anchored in the past and understood as history, that person is unshackled from their trauma.

It’s empowering to frame trauma as a response style that has become an impediment to one’s ability to pursue their happiness, rather than the common use of the term as meaning “something that’s upsetting.” Recovery from trauma comes with increased self-empowerment and agency to achieve one’s own happiness.

It can be seductive to embrace victimhood as an identity or overindulge in trauma labeling because in a state of helplessness, one can righteously be upset, shirk responsibility, and feel entitled to receive nurturing in ways that may have been violated in the past. It can also be weaponized to quickly shut down a person whose behavior is upsetting, creating an illusion of unassailability. This can cause social polarization and disable discourse which further disanchors one from a shared reality with the world. Creating a sense of self that is powerless is antithetical to affecting change, and in fact, a potential creator and perpetuation of trauma.

Trauma is correlated with the individual’s sense of disempowerment or inability to react to a threatening external circumstance: “When faced with danger people automatically secrete stress hormones to fuel resistance and escape…If for some reason the normal response is blocked — for example, when people are held down, trapped, or otherwise prevented from taking effective action, be it in a war zone, a car accident, domestic violence, or rape — the brain keeps secreting stress chemicals, and the brain’s electrical circuits continue to fire in vain…it has been recognized that trauma survivors are prone to ‘continue the action, or rather the (futile) attempt at action, which began when the thing happened.’ Being able to move and do something to protect oneself is a critical factor in determining whether or not a horrible experience will leave long-lasting scars” (The Body Keeps Score, Bessel Van Der Kolk).

Since trauma is the maladaptive response to an experience of disempowerment, not the incident itself, once recovered from trauma, a person may perceive themselves as having been “attacked,” “traumatize” or “victimized,” but not having “trauma” any longer. This empowers and enables a person to be an active participant and creator in a diverse world and their own future.

Self-awareness of trauma or acceptance of a past victimization is a brave and necessary first step to healing and empowerment (one may also unconsciously be influenced by their trauma even if they are unaware or in denial of it). However, overindulging in victim identity may cause one to develop a sense of helplessness and compete for victimhood, rather than strengthening a sense of agency that will enable achievement of one’s true goals and ambitions. Another danger of competing for victimhood as caused by an external party rather than one’s own maladaptive response is that it engenders re-traumatization and prevents action and progress. This makes the self and others impotent, disables discourse, proliferates polarization, and worst of all, narrows the board of one’s life, what they can experience and know, and what they can create and do in the world.

Wallowing in trauma identity may be the product of an entitlement to happiness.

If one believes they are entitled to happiness, the absence of it is a self-justified outrage. A rational progression of unactualized happiness one feels entitled to is a sense of helplessness to an oppressor, and a wallowing trauma identity. Pursuing happiness is hard. Achieving it even harder, and usually fleeting, which is a good mechanism to progress.

In John Locke’s essay Concerning Human Understanding, he writes of “The necessity of pursuing happiness [as] the foundation of liberty. As therefore the highest perfection of intellectual nature lies in a careful and constant pursuit of true and solid happiness; so the care of ourselves, that we mistake not imaginary for real happiness, is the necessary foundation of our liberty.” Locke was referring to the Aristotelian meaning of “happiness,” which Aristotle has described not as the satisfaction of our desire for sensual pleasures, but a person’s active pursuit of virtue or excellence, or, in other words, the pursuit of meaning.

The Declaration of Independence is believed to be modeled after the Virginia Declaration of Rights which spoke of “pursuing and obtaining happiness and safety.” Thomas Jefferson draft which was adopted on July 4 omits “obtaining,” and states what we know today:

We hold these truths to be self-evident, that all men are created equal, that they are endowed by their Creator with certain unalienable Rights, that among these are Life, Liberty and the pursuit of Happiness.

The “pursuit of happiness” is a significant clause, which maintains the boundaries of an individual’s responsibility to themselves, but not the entitlement to happiness. Indulging in victim identiy, which is derived from an entitlement to happiness, provides an illusion of safety (a deformed happiness) that impedes liberation from trauma and the pursuit of happiness. One’s acceptance of their daunting ability to achieve happiness enables the pursuit.

“This universe henceforth without a master seems to him neither sterile nor futile. Each a atom of that stone, each mineral flake of that night-filled mountain, in itself, forms a world. The struggle itself toward the heights is enough to fill a man’s heart. One must imagine Sisyphus happy.” (The Myth of Sisyphus, Alber Camus) 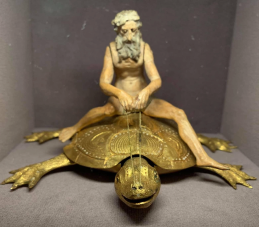