There is a fine line between Activism and Journalism. A Journalist must stay vigilant to represent facts truthfully — to share information and data, without the human instinct to infer or goad a direction (which is Activism), or acquiesce to outrage. True Journalism trusts and honors individuals to form their own conclusions.

I’ve noticed a trend in reporting lacking in integrity and respect for the audience that it is not deserving of the title of “Journalism,” but would be more aptly called “Virtue Vampirism.” Virtue Vampirism should not be confused with true Virtue, which operates on first principles, rather it is a perversion and exploitation of the free press for what appears to be self marketing.

Virtue Vamps, unlike Journalists, lack accountability. They are primarily witch hunters, lazily attacking anyone they can prop up as villains in order to score virtue points as a “savior” to victims they’ve created.

The most recent scapegoat is a vague effigy of Tech. In normal times, this can usually be tolerated the way one would an annoying gnat buzzing around food, but in a state of crisis or emergency where their actions have real consequences, this behavior is not just ignoble; it’s dangerous.

Virtue Vamps don’t contribute to a solution. They may be sincere, but without the rigor of accountability, their contribution is like that of a child whose “help” burdens others to clean up, repair damage, and manage ego coddling demands.

Of course, there is a role for criticism in society, and responsible protocols for serving the need. The Virtue Vamp’s formula, however, is a recipe for distortion:

2) Find a villain to blame

At best, this is guided by the type of pity Stephan Zweig described as, “the weak and sentimental kind, which is really no more than the heart’s impatience to be rid as quickly as possible of the painful emotion aroused by the sight of another’s unhappiness, that pity which is not compassion, but only an instinctive desire to fortify one’s own soul against the sufferings of another.”

Some weeks ago my little sister, a medical student, was told to prepare to self-quarantine as one of her patients was suspected of having COVID-19. On that same day, my parents discovered that the boxes of masks in their medical office had been stolen. Police arrived at their office later that evening to respond to an attempted break-in, presumably another frightened person desperate for Personal Protective Equipment (PPE). Childhood friends, now doctors, sent me frantic messages — their hospitals were like war zones, they were reusing expired PPE from their emergency reserve, and they were days away from total depletion.

Mandated by the city of San Francisco to Shelter-in-Place, I channeled my anxiety into a volunteer initiative with others in the tech/startup space to quickly build out a supply chain and distribution marketplace for PPE — the armor desperately needed by our frontline soldiers, our doctors and medical professionals, to fight this war on coronavirus. I was inspired by the dedication of the volunteers working around the clock, as well as our manufacturing colleagues in Asia, to secure millions of certified masks in just a few days for hospital orders placed by the state governments.

I woke up the next morning to find the headline of a Vox.com article trending on Twitter: Why We Shouldn’t Rely on Silicon Valley for Face Masks. The article disparaged tech as “not accountable to American voters, only theoretically to shareholders. And…not always transparent about what exactly they are doing and on what time frame…” It framed “the mask donations as a distraction from companies’ otherwise poor corporate citizenship.” Then went on to criticize the inadequacy of the volume of masks that these Tech volunteer efforts could procure: “Plus, even 9 million masks are not enough. The White House has said that it has ordered ‘hundreds of millions’ of N95 masks, the gold standard of personal protective equipment.”

Yes, 9 million masks is not enough, but it is something. And how many lives can be saved by something? Whose baby sister or father could be in that Vox.com article’s classification of inadequacy? I wondered whom this Virtue Vamp was speaking to. Surely, not the doctors and nurses desperately asking for donations of even used masks, or the hospitals calling out to citizens to sew cloth masks that would serve them better than the nothing they had. It was confounding. What was the goal of this article? Who was it benefiting?

What is particularly insidious about Virtue Vamping is that it is fundamentally an exploitation of those most vulnerable who have an actual and practical stake in their own viability.

Ironically, the writers and editors of these articles attacking Tech on grounds of accountability are accountable to no one. Just weeks prior, Vox.com’s “Just-the-flu-journalists” published articles emphasizing the ineffectiveness “of face masks for preventing disease in the general population.” It buffooned Tech as alarmists for taking life-saving precautions of limiting handshakes to protect against COVID-19 contagion — caricaturing social distancing practices as a trope of “Silicon Valley elites” and “Tech billionaires” who have “long been gearing up for Doomsday scenarios.” These cheap shots at Tech narratives endangered readers and writers alike. Rather than printing an apology or retraction for the role they played in the spread of the pandemic, Vox.com erased their history. They’ve rewritten pages in articles without any mention of retraction or correction, and in a particularly Orwellian act — deleted a Tweet in which they published, “Is this going to be a deadly pandemic? No.” 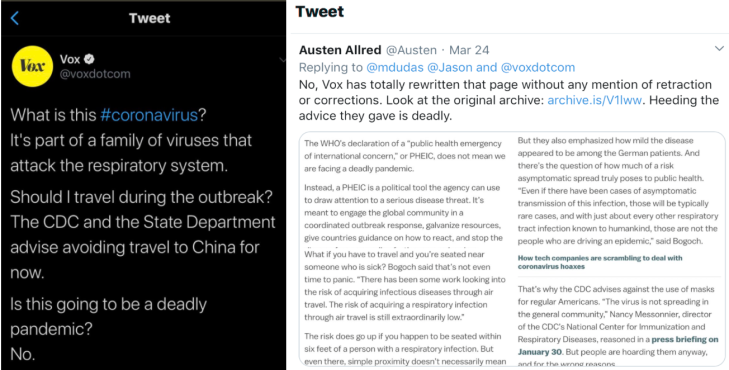 I didn’t have time to dwell on this as orders had been pouring in from around the world, including one from The White House.

Another identifying quality of a Virtue Vamp is that they attack real people doing earnest work for not being a “personified Abstraction” in T.W. Thorton’s sense. That Vox.com article writes of the “void left by the government” then warns against “relying on corporate philanthropy — [rather] than the government — in solving this problem” of medical supply shortage. A “Government” is an abstraction; it is an organization made of citizens working together, which can include people in Tech. The Vox.com’s Virtue Vamp speaks of “Government” as if it is Santa Claus, unaware that the presents left under the tree, or the millions of PPE ordered by government entities are being delivered to hospitals by real people volunteering and working together. They are like children criticizing their parents for not being as good as Santa Claus.

The way out of this pandemic, and for all of us to thrive, is to work together. Virtue Vamps take precious time and energy to pit individuals against one another to bolster their own ego stature as paragons of virtue. Now is not the time to create imaginary dragons when there are real ones to be fought.

After seeing the virus rampage through communities, ravaging lives and medical systems, a childhood friend of mine, a news anchor, has begun to report on these stories. Her colleagues reporting on the virus mitigating statistics of Sheltering-in-Place, wearing masks, and other practices of social distancing and hygiene are receiving death threats by people caricaturing them as alarmist agents of conspiracy. Virtue Vamps, in not prioritizing due-diligence, sacrifice truth and public safety to score virtue points for themselves. In doing so, they endanger citizens, true Journalists and those real people working to save lives, keep us connected, and create jobs.

We should not be dignifying Virtue Vamps, even if they hold titles of “Journalist” for venerated publications, as performing the noble act of Journalism. Our fates are bound together, and so we should work together.